US Black Woman with Crazy Booty and Boobs Spotting Body Tattoos – PLUS: Police Officer Picks Up Drunk Woman to Have Sex with Her at Her Home 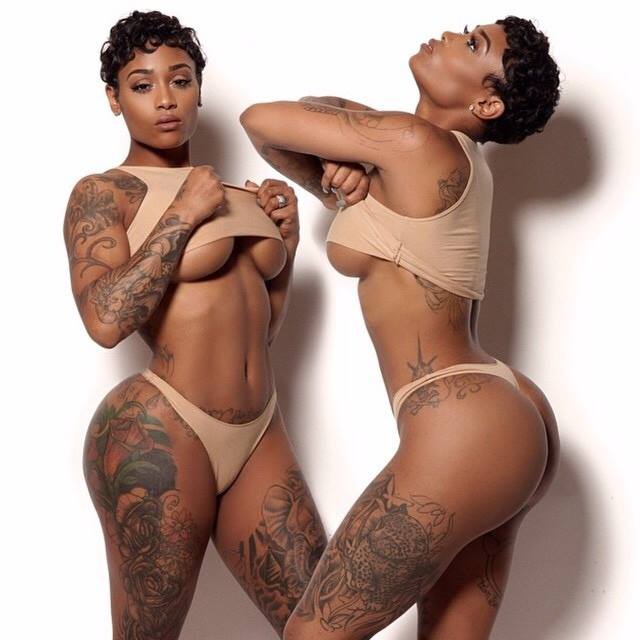 A black lady on fire exhibits her sexy body with tattoos ,boobs in tiny crop top and shapely booty in micro pants

A black woman in light brown pants and extremely short crop top that tightly wraps and pops out her well-shaped boobs in a manner that will set you on fire. She looks pretty in short hair, her tattooed body is attractive and she’s got that naughty booty that sticks out at a steep angle in an attempt to tease you. Whether it’s a butt implant or natural is certainly none of your business, it just looks nice to slap that lazy bum.

A Canadian policeman who picked up a woman and took her to her home to have sex, has been demoted to a lower rank by the tribunal. The police officer McKay of Hamilton, Canada pleaded guilty to the offense before the tribunal and showed some remorse for his deeds.

This is not the first time that Officer Thomas McKay has been charged with violating his duties as a law enforcer. McKay was convicted of committing an almost similar act of sexual misconduct last year when he got a prostitute to perform oral sex on him while he was on duty. As one member of the tribunal said, there seems to be a pattern of sexual misconduct in McKay’s violations.

It is claimed that McKay encountered a drunk woman at night while he was patrolling the area with a few minutes left to finish his duty. The offense was committed while McKay was doing his shift work in the village of Hess. He approached the woman and started a conversation with her, which lasted 15 minutes.

When his duty ended at 3:15 am in the early morning whilst it was still dark, he went back to talk to the woman and picked her up. He was accompanied by a fellow officer and the three of them were riding in the same car.

It has been testified that the woman didn’t need any help and she was not in any type of emergency that justified being attended to or picked up. McKay offered the woman an unsolicited ride, supposedly to drop her home, but he drove back to the police station, where he removed his police uniform and changed into civilian clothes.

The woman was sitting in the car when McKay and the other officer went inside the police building. He came back and drove the woman to her place, where he asked to have sex with her. The two had sex inside the house, and McKay left the house after 45 minutes.

Marco Visentini, who represented the Police Department, said McKay was a repeat offender who showed an inclination towards sexual misconduct of this nature. Last time, he was disciplined for engaging in oral sex with a hooker. He denied the offense saying the woman set her up but he had been caught doing the act by another policeman. McKay’s punishment which was supposed to end in April 2016 has been extended to April 2017.The demotion has left him with a loss of $57,000 in salary that was due to him.

At the hearing, he was warned that he would be fired if he commits another violation of duty that would bring him to the tribunal. McKay’s defense said the woman was an adult who was responsible for what happened. As it turns out, the sex was mutual but his job as a police officer makes it illegal to solicit sex from members of the public while on duty, which is no different from preying on vulnerable women for sex.