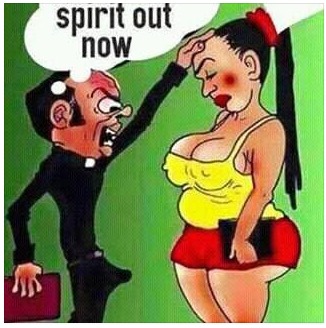 Sex addicts like sex more than the normal person. They can’t seem to get their mind off sex, they are always thinking about sex, it might not be on a daily basis, but in specific conditions. They actively seek out sex or they spend time watching porn and other X-rated material. Whenever they are in a crowd or at a social gathering like a party, night club, sports event, beach, pool, church and just about anywhere where sexy women are found, their imagination runs wild. Of course, this is normal male behaviour, but if you think sex is preoccupying a larger portion of your mind and time, you should find ways to release that tension or at least reduce the obsession. It’s not only men who are sex addicts, women who are obsessed with sex are called nymphomaniacs.

Being preoccupied with sex all the time can affect your productivity and discipline in other areas which need your attention e.g. business, work, family, studying, exercise, event preparations and relationships. Your goals and plans will take a back seat. Flings, sexscapades, one-night stands and discreet relationships will take priority.

It’s easy for women to keep their mind off sex for a while than it is for men. However, women also like sex but there is a difference in how they are sexually aroused .The sexual stimuli that men respond to is not the same stimuli that attracts women. For example, a man gets easily turned on by a woman in suggestive dressing like a mini skirt, body sculpting dress, transparent dress and cleavage top. Exposed thighs and boobs dancing under a transparent dress or half covered can easily get a dick up in less than a minute. Pictures of naked women can arouse a man instantly and brushing against a woman’s boobs and ass can put the cock on fire.

So the question is how can you keep your mind off sex or how can you stop thinking about sex? We are not talking about completely abstaining from sex, because it’s practically impossible for many guys even a convicted Catholic priest. But we are talking about skipping sex for a week or two and even one month. Sexual arousal cannot be avoided or stopped because it’s a biological need and response. A Catholic priest or church pastor will get aroused by a woman in mini skirt sitting in the front row, but of course he is going to suppress his feelings. Behind the scenes, this so-called “Man of God” can’t suppress his feelings. He is busy using his position to seduce female members of the congregation, soliciting sex in exchange for “blessings”, healing and forgiveness of sins. After some time, rumours start to circulate. The sex for blessings scandal is exposed by the media. Six to sixteen women are reported to be pregnant. The results of his sleazy dick, no different from a womanizing Hip Hop star with seven baby mamas.

Actually, a Hip Hop star with seven baby mamas is much better than a perverted pastor or hypocrite Catholic priest who doesn’t live what he preaches, and who manipulates the word of God to get under a woman’s pants. We know that Hip Hop is about bling bling, fast cars, bitches and wine. It’s a lifestyle, so people are not shocked to hear that a Rapper has seven baby mamas.

Ultimately, the best way to stop thinking about sex is actually having sex, but you have to do it in a certain way and it involves adjusting your mind to reality as well as psychologically desensitizing your reaction to women and the sex act. Here are ways to keep your mind off sex for a week or month:

If you have a girlfriend or sex partner, you should practice marathon sex.Marathon sex requires stamina and endurance on the part of the male partner. It basically involves long sex sessions. The guy who is involved should seek to satisfy her partner. It is best done on a weekend when you are both off work. So you can actually plan to have sex all day as part of your quality time together. If you don’t sweat during sex, then you haven’t started. Sex until you sweat !!! , then start all over again. A relaxed environment such as a lounge where you can watch TV all day while sitting on the couch is recommended. If not, a bedroom with a TV is equally suitable. Just make sure that you have a comfortable place to spend the day.

Long sex sessions should allow you to experiment different positions, which keeps the encounter exciting. If you don’t have sweat running over your face or feel your knees weakening, then you haven’t done a marathon. The bonus is that this kind of sex is a form of exercise, that you don’t have to go to the gym for.Your muscles should be aching like a man who has been out at the gym. At the end of the day, you should feel like you have had more than enough. She may want more, but you should be tired. The goal of marathon sex is to make you bored and disinterested in sex, and at the same time, it is the most satisfying sex for both of you. Women like guys who can go a long way. If you do it right once, she will never forget it even if you skip months without sex.

With marathon sex, you can stay at least a week without needing sex again. Most of the times, it helps you to appreciate her other qualities other than her body. Just being in touch with her, doing things together is usually enough for you. The relationship moves from sex mate to soul mate.

So basically, to keep your mind off sex for a while, you have to accept that sex is good but you also have to believe that it can be boring. The only way to get bored with sex is having too much of it with your partner.

The disadvantage of blow jobs or short sex encounters is that they do nothing but create more hunger. You feel like fucking her on a daily basis. After each 15 minute encounter, you still have a lot of energy and sexual tension left in you. That is some unfinished business which makes you want to fuck her tomorrow during lunch time in your car.