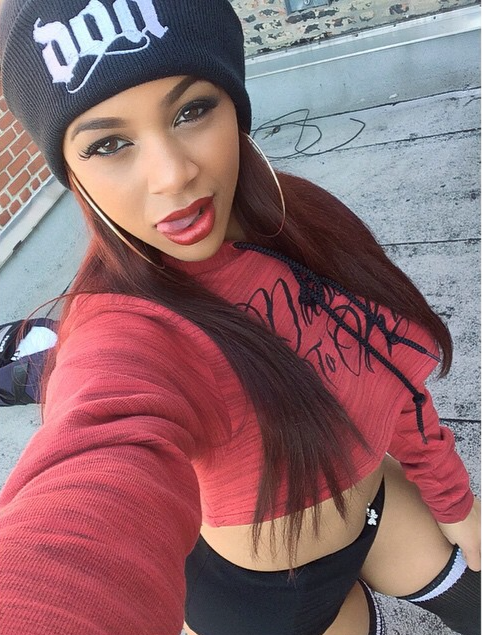 A cool pretty girl that you would want to be with wearing a woolen cap,cropped sweater and leggings

This pretty American girl of mixed Afro/Euro/Latino heritage  looks cool in a black woolen hip hop cap, a maroon woolen crop top sweater that exposes her fine belly, sweat pant shorts and woolen leggings.Wow,and those nice red lips look tempting for a long smooch or French kiss. Her face makeup is simply attractive and that long hair is fine. This girl here is putting on what you would call SWAG and she is also good looking.

Does the Grand Prix Attract Sex Workers and Tourists?

CLES, an organization which is composed of people against the sex industry and prostitution has issued a statement warning the Mayor of Montreal, Tourism Board and Grand Prix organizers against what they call “exploitation of sex workers” during the Grand Prix racing event, which is held on weekends in that city.

The organization has stepped up its campaign on social networks, targeting the accounts of the Mayor as well as the Tourism Board. They are planning to hold a family friendly event as an alternative to the advertisement of escort services by agents, clubs and adult shops.

The organization claims that visitors to Canada think of Montreal as a haven for sex tourists. Apparently, soliciting the services of a prostitute is not allowed in most parts of Canada, but strip clubs are allowed to operate.

One woman who used to work as an escort, and who is now a member of CLES says that she was approached by escort agencies during the racing season to take part in entertaining visitors.

The members of CLES say that sex tourism has been going on for a long time in Canada, especially during the Grand Prix season. They claim that many girls in the city of Montreal are recruited by agencies to work extra hours since it’s a busy season with many tourists.

Taking a look from a different perspective, anyone who is not interested in working for escort agencies has a choice not to, it’s not like these girls are forced to work as escorts. They might be protesting just to sour things for girls who have chosen to remain in this profession, those girls who have no problems and actually benefitting from these services.

As one member put it, recruiting sexy models to pose at motor shows or racing events is some kind of soft exploitation of girls, which covers the prostitution that is going on in the background.