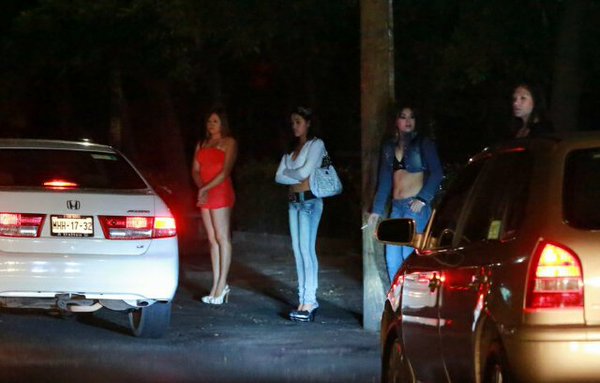 Being a modern prostitute has nothing to do with how you dress, but it’s about how you operate your business. You can put on the most seductive attire that will give any man a hard-on in the streets but if you don’t know how to use modern communication tools to meet clients, then you will lose out on potential income or worse, put yourself in danger.

The old-fashioned prostitute goes out to the streets at night to solicit clients. She and another group of hookers will stand at strategic positions near hotels, bars, clubs and other places frequented by late night revellers. In order to get enough money to meet their needs, they will go out every night to catch night owls who are drunk and looking to spend some cash on booty.

Late night hookers know the risk they are getting into but because of their desperation for easy money, they will ignore the risks. There are many stories told of how some prostitutes end up being mistreated by their clients, including being assaulted, robbed and raped by night-time criminals and drunk patrons. They face the risk of being kidnapped by their clients and taxi drivers who will change route, force sexual intercourse without paying, and then dump them by the roadside.

Besides the night-time risks encountered in the streets, old-fashioned prostitutes have commuter expenses to take care of if the night spots are far from their homes. She has to take a taxi to and from a popular red zone in town or outskirts.

The troubles of an old-fashioned hooker are just too much. It never rains but it pours. One of the worst experiences of plying the world’s oldest profession is being arrested by the police where prostitution is not allowed. Newspaper headlines of prostitutes being rounded up and brothels being busted by the police are common. Some of these women are unknowingly sucked into sex trafficking syndicates.

How to Be a Modern Prostitute

To avoid the dangerous risks and stresses of being a prostitute, you have to operate in a smart way. People, this is 2017, we are living in the digital age of smartphones, social media and chat apps such as Whatsapp, Viber and Facebook Messenger. We also have escort sites, classified ads and email. The modern prostitute is internet savvy, she knows how to solicit clients via these platforms. There is a reason why observers are always complaining about a generation that spends too much time on the mobile phone. The mobile phone has become a basic necessity rather than a luxury. A lot of people’s lives now revolves around the mobile phone. They are probably checking a status update on Facebook or tweeting something on Twitter. People in this era are spending most of their time on social networks and chat apps. If you are a prostitute, you have to take advantage of this opportunity. What does this mean?

You have to take advantage of new communication channels that are being used by the majority of people. These communication channels allow you to operate your prostitution business from home. You don’t need to go out to the streets anymore. The next question is how do you use these channels to solicit clients? It’s simple, all you need to do is create an online account on the following platforms and post your contact details (mobile number, Whatsapp number, email or Skype):

Set up a Facebook and Twitter account that allows you to connect with potential clients who are on social media. The people that you intend to reach are already on social media anyway. These are people with high and middle income jobs. Creative prostitutes have active Twitter accounts where they post seductive photos on a regular basis. Here, they also indicate contact details such as mobile number, whatsapp number and email.

Unless you are living under the rock, you should know what an escort agency is all about. Modern escort agencies don’t advertise in offline magazines and newspapers, but they have a local website for hosting escort profiles.  Clients can visit the site and choose a woman that they are interested in. They will either choose an independent escort whose contact details are displayed or a private escort who can be contacted by making an arrangement with the agency. Some of the major escort sites have listings in all countries. These include CityofLove, Eros and EuroGirlsEscort. There are sites which are restricted to a single country, for example HotLocalEscorts features escorts in the United States only. You have to enter a US Zip Code to find an escort. Other sites specialize in a demographic niche, for example if you are looking for a black woman to spend a night with, a site like BlackEscortsDirectory is the place to go.

A lot of online classified Ad sites have sections for dating and personals. Find a local classified Ad site and sign up to post adverts in your area. As an example, if you live in San Francisco, find a San Francisco classified Ad site. However, there are many international classifieds sites such as BackPage and Gumtree which feature escorts all regions. Otherwise, you can join local sites like NairobiRaha, NairobiSweet, NairobiHot, Naughty Reviews, Metro, Harvard Magazine, MyAdultClassifieds, The SexyList and NowToronto.

Install a Chat app like Whatsapp on your Mobile Phone

Chat messaging apps are popular in Africa, Asia and South America. The reason why Whatsapp became so popular is due to the fact that it allowed people to send messages at no cost. Whatsapp texts are more affordable than SMS or MMS. Modern prostitutes are using Whatsapp to connect with clients all over the world. You can connect with a client in Dubai or USA if you are in Nigeria, South Africa or Kenya.

Set up a Tumblr Blog

Tumblr allows you to create a personal blog that you can update on a regular basis. Blogs are available in many categories including adult content. Sign up for an account and set up a sexy blog that promotes your services.