Sexy Brown American Girl in Thong Flaunts Her Booty – PLUS: A Night of Lovemaking 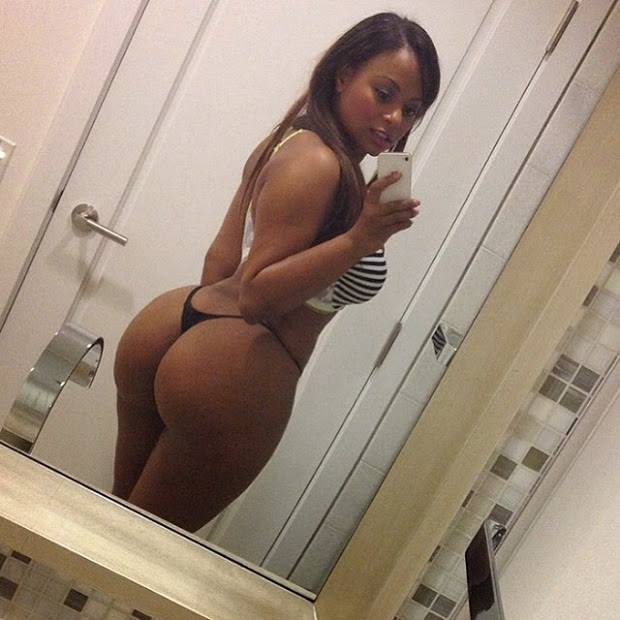 A bootylicious black woman in black thong takes a selfie in her bedroom while checking her backside in the mirror.

David and Pamela – A Night of Lovemaking -3

As the pair walked towards the apartment, it was clear that love was in the air, Pamela jokingly asked David if he knew where to find “those girls”.

“Oh you are talking about those girls, I know what you mean” David said as he smiled.

As they approached the gate, Pamela followed David behind. He opened the front door, music was playing from his computer and they sit down. Pamela took the chair next to the kitchen table. Unlike other girls, David thought Pamela was a cool girl who didn’t fuss too much about stuff and material things. She was just a young girl looking for fun. She came from a poor background, but she found David’s place so familiar and not so intimidating. It was a modest apartment which she could relate to, as humble as its owner.

Just as he had predicted, Pamela stood up from the kitchen table and sat on the bed next to David. They watched a movie, and soon after they were joking like old buddies. Pamela was a playful and naughty girl and she didn’t take long to get to get comfortable with David although it was the first day of their meeting.

If there was one thing that Pamela noticed, it was the fact that David was a nice guy, a bit shy but not so shy, a little bit reserved and respectful. He was the type of guy who did not easily express his inhibitions but of course he could talk passionately about any neutral subject.

David loved the attention he got from Pamela. As they were watching a movie, Pamela turned to David, she started to wrestle him, and tickling him under the armpits. David just started laughing, it was clear that the girl was sizing him up.

The playful wrestling continued intermittently, stopping when each partner got up to do something and resuming when the other partner returned bed. There were a lot of giggles, and laughs. It was clear that this would continue throughout the night, but as the pair wrestled, with Pamela over David and hold pinning arms on the bed, David broke the grip with a swift maneuver and flipped Pamela to the side, moving his legs between her thighs and thrusting with his pants on. They began passionately kissing each other.

“Switch off the light” Pamela moaned

David switched off the light, the room was faintly illuminated by the computer screen. As Pamela got on top of David like the naughty girl that she was, David recognized her face clearly for the first time. She was feeling sympathetic for him.