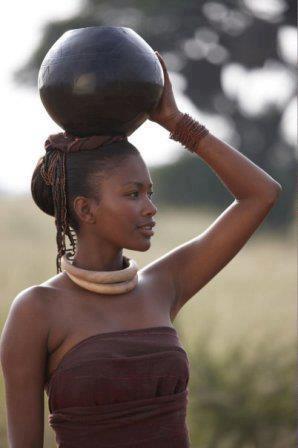 This pretty Kenyan girl is one of the beautiful girls that you would find in Africa, untainted by modern influences, proud of her culture and happily living the traditional lifestyle that has been passed on between generations. She is wearing a traditional African double-ring necklace made of ivory, some African bracelets, and carrying a clay pot on her head, most probably water. As you would have noticed, most African women are slim or just average and well endowed. Of course, you would find a fat woman here and there, especially in the cities where people indulge themselves in refined foods, but still they are very few compared to western countries like the USA where there are obese women in all corners. Deep in the rural areas of Africa where people are still living the traditional lifestyles , people are very fit and healthy, partly due to a natural diet composed of vegetables, fibre, fruits and protein. The active farm life and busy schedules in the village also keep the people fit.