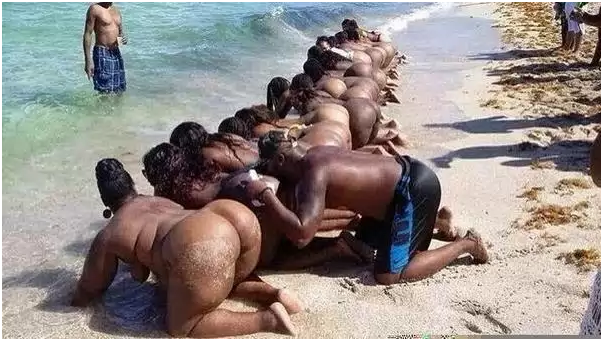 A pastor ordered 21 women to strip naked,then kissed their asses,in order to give them blessings,so that they can find a husband LOL

The controversial picture has been circulating around the internet since July 2014 and it shows at least 20 naked African women lining up on the beach, and kneeling on the sand with their buttocks sticking out, and a man purported to be a pastor kissing their asses to impart ‘blessings’. It is claimed the pastor took the single ladies to a Caribbean beach resort, where he invited them to the beach and ordered them to strip naked so that he can give them blessings to find a marriage partner.

Apparently, these were single church ladies who were desperately looking for a marriage partner, and they complied with the pastor’s order to strip naked and get blessings to find a man.However, there are questions about the authenticity of the stories. The origin of the picture remains unknown, no details are given and the sources are unverifiable, which makes one doubt the credibility of the stories.

In most cases, with regards to controversial stories like these, the author or reporter would have given the name of the church, pastor or location where the event happened, but no details are available, it’s just a picture. The person who posted the picture might have deliberately done this to achieve a viral effect.

Some stories say the women are from Nigeria, and some say they are from South Africa. The story has appeared on Reddit where one community member provides a link to a Twitter account where the story is supposed to have emanated around the month of July in 2014.

Members of a church or cult doing crazy things is not something new. A church in South Africa [The Rabboni Centre Ministries] has been in the news headlines after the pastor [Mr. Lesego Daniel] ordered his congregation to eat grass and drink petrol. In Nigeria, a 53-year old pastor [Mr. Timothy Ngwu] was arrested after he impregnated more than 20 female members of his church, who include young girls and married ladies. He says he slept with the women under the direction of the Holy Spirit. In Kenya, a pastor ordered his female congregants to come to church without bras and panties so that God can easily enter them. All these stories prove that people can be brainwashed to do crazy things in church, so the story of women stripping naked at the beach might be true. 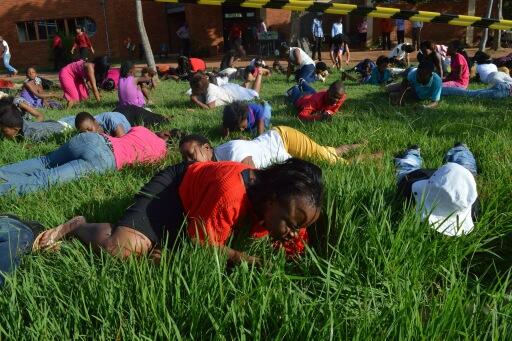 A Nigerian pastor impregnated at least 20 women and young girls from his church.He claimed the Holy Spirit directed him to have sex with them

It Might Be a Smear Campaign against the Church

It boggles the mind why the poster never gave details about the photo. He or she might have done this to smear the church. If the story is real, the author would have obtained an opportunity to defame the church by giving the names and details to a news agency who would do the investigations, but the story lacks substance and it’s obviously fake.